Are you ready to see three of the most massive names in popular music today??? Prepare for a night night of unbelievable entertainment like you've never seen before – Train, Natasha Bedingfield & O.A.R are joining forces for a performance at the Fiddlers Green Amphitheatre on Tuesday 4th July 2017!!! Tickets will disappear fast for this hugely in-demand show – don’t delay in getting yours!! Hit the “Buy Tickets,” button above to secure your place NOW!!! 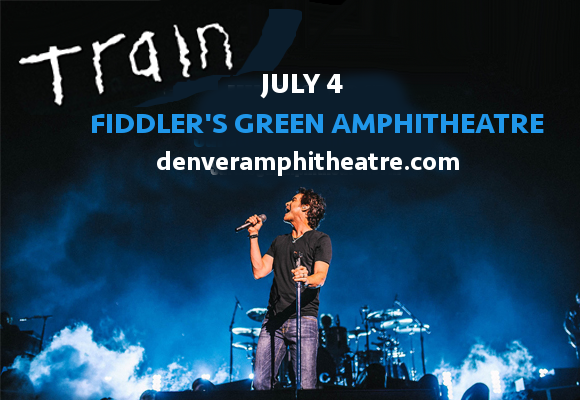 Hailing from San Fransisco, Train, the roots rock band that took America by storm with their very first album, are now more than 20 years into their career and still topping the charts!!! With the original lineup consisting of Patrick Monahan, Jimmy Stafford, Scott Underwood, Rob Hotchkiss and Charlie Colin, the band’s debut album, the eponymous “Train,” of 1998 was a massive success, since platinum-certified, with the first single, “Free,” seeing a lot of airplay on rock stations, while the second, “Meet Virginia,” peaked in the top 20 of the Billboard Hot 100!!

The band saw continual success and then another massive wave of it in 2009 with “Save Me, San Francisco”. The album saw the platinum-certified hit "Hey, Soul Sister”. Their most commercially successful single yet, it reached number 3 on the Billboard Hot 100 number one in 16 other countries, with the live version of the song earning the band a Grammy Award. Now on tour with their 2016 album, “A Girl, a Bottle, a Boat,” get ready to sing along with all the hits, old and new alike!