Two of the greatest classic rock acts from the 1970s, Lynyrd Skynyrd & Peter Frampton, have teamed up for a nostalgic co-headlining tour, and they come to Fiddlers Green Amphitheatre on Tuesday 9th August 2016! Both famed for their energy on stage and phenomenal live performances, these veterans of the touring circuit are not to be missed! Catch these celebrated performers for one unforgettable night and sing along to all the hits from their illustrious careers! 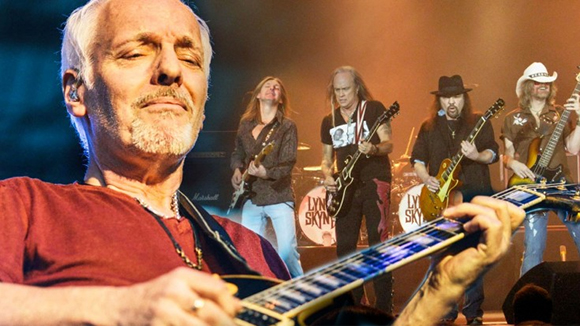 Lynyrd Skynyrd was formed in 1964 by three teenage friends, and is best known for their signature songs “Free Bird” and “Sweet Home Alabama,” which helped them make their name in the music industry as pioneers of Southern Rock. The band went through several line-up changes before releasing its eponymous debut album in 1973. In 1977, the band was at the peak of its popularity, but a tragic aeroplane crash put an abrupt end to its most successful incarnation, killing three members. Having disbanded after the disaster, Lynyrd Skynyrd reunited after a ten year hiatus, in 1987. Co-founding member Gary Rossington and core members Johnny Van Zant (younger brother of original lead singer and founding member Ronnie Van Zant), along with guitarist Rickey Medlocke, who recorded with the band for a short time in the early 1970s, are the current line-up and they continue to tour and record. Lynyrd Skynyrd was inducted into the Rock and Roll Hall of Fame on March 13, 2006.