Ready for a revolution??? On tour with their brand new album, “Revolution Radio,” punk icons Green Day, with Catfish and The Bottlemen in support, are coming to Fiddlers Green Amphitheatre on Wednesday 9th August 2017 for one unmissable night! Tickets are already flying as we get closer and closer to the LIVE event – what are you waiting for??? Grab yours while you’ve got the chance!! 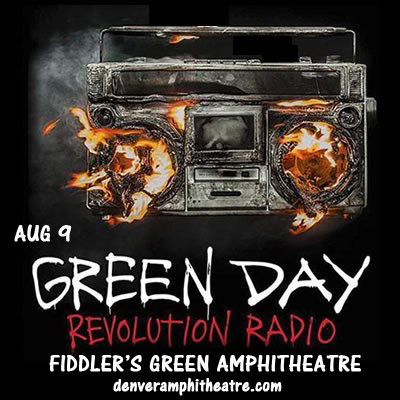 The pioneers of mainstream pop-punk, going strong now for just over 30 years, Green Day have lost none of their rebellious charm or energy. Known for never stopping – the band’s ethos being to write, record, tour, and repeat almost continously without a break, keeping their wheels well-oiled – the band finally took a well-deserved break 5 years ago, during which they started work on their much-anticipated 12th album, “Revolution Radio”. The album debuted at number 1 on the Billboard 100, their third album to do so!!

The group have won and been nominated for multiple awards over the course of their career, including five Grammy wins and 3 Tony nominations of which they won two. The band were inducted into the Rock n’ Roll Hall Of Fame in 2015. With sales of over 85 million records worldwide, Green Day, the trio of Billie Joe Armstrong, Mike Dirnt and Tre Cool unchanged since their first album “Kerplunk,” are one of the most recognisable and iconic bands in popular music history.

Do not miss out on your chance to see the legends of punk rock live – get your tickets to see Green Day NOW!!!