Denver's 98.5 KYGO is celebrating 42 years of being Denver's Number One For New Country, inviting you on their very own birthday bash! 98.5 KYGO Birthday Bash brings some of the country's biggest country music artists together in a night to celebrate at Fiddlers Green Amphitheatre on Saturday, 2nd of July 2022. 98.5 is bringing in Chris Young, Walker Hayes, Mitchell Tenpenny, Morgan Wade, and Callista Clark to the party! Tune in, book those tickets, and party with the crowd led by your favorite country stars, brought to you by 98.5 KYGO. 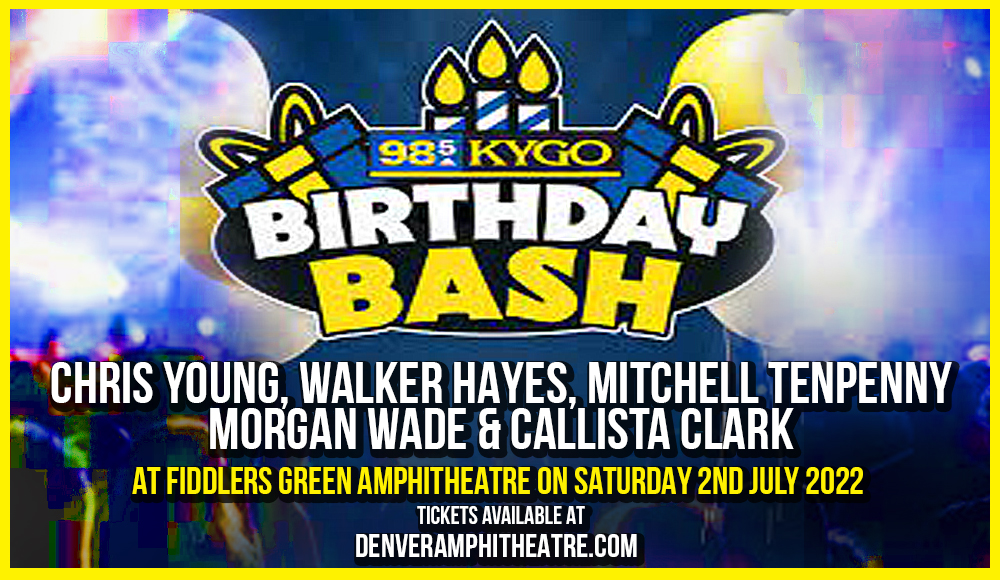 98.5 KYGO-FM is Denver's staple radio station for the best country music. This year, the station celebrates forty-two years as Denver's Number One For New Country with a birthday bash. There's no better way to hold a party other than having a star-studded roster of country star artists! Taking the stage at the birthday bash are Chris Young, Walker Hayes, Mitchell Tenpenny, Morgan Wade, and Callista Clark.

Grammy-nominated Chris Young is one of country music's biggest stars, emerging in 2006 as he won the 4th season of Nashville Star, a TV singing competition. His biggest RIAA Platinum-awarded hits include "Gettin' You Home (The Black Dress Song)", "I'm Comin' Over", "Hangin' On", and "Think of You".

Get ready to go 'Fancy like, oh as Walker Hayes joins the crowd on this very special birthday bash. The smash-hit maker behind the viral track "Fancy Like" reaching #3 on the Hot 100, and the 2x Platinum hit single "You Broke Up with Me" is coming to hype up the crowd and take part in making 98.5 KYGO's birthday bash a blast!

County pop star Mitchell Tenpenny is also marking his attendance at the birthday bash! Hailing from Nashville, he's the man behind the hit singles "Anything She Says", "Alcohol You Later", and "Drunk Me". Better get ready at Mitchell Tenpenny is surely gonna make the crowd go wild!

Tagging along are emerging country stars Morgan Wade and Callista Clark. Morgan wade just re-released her second record "Reckless" with six bonus tracks; the album featured her notable single "Wilder Days". Callista Clark just dropped her debut EP "Real To Me" last year, featuring her single "It's 'Cause I Am" reaching #20 on the Country Airplay charts.

Listeners are in for a blast at 98.5 KYGO Birthday Bash that features some of country music's hottest and emerging stars all together sharing the stage to celebrate forty-two years as Denver's Number One For New Country. Don't miss out on this wild party with your favorite country hits live on stage. Tune in and book those tickets now!