98.5 KYGO Presents Tracy and Fizz's HOOBAJOOB, featuring a start-studded lineup of artists – Dustin Lynch, Bailey Zimmerman, and Nate Smith. At this ultimate concert festival, joining the stage are Corey Kent, Avery Anna, and Jordan Fletcher. Off of the radio and onto the live stage, catch Tracy and Fizz's HOOBAJOOB throw spectacular live performances from these artists at Fiddlers Green Amphitheatre on Saturday, 24th of September 2022. Don't miss out on catching your favorites performing their biggest hits and fan-favorite tracks live on stage by booking your tickets now! 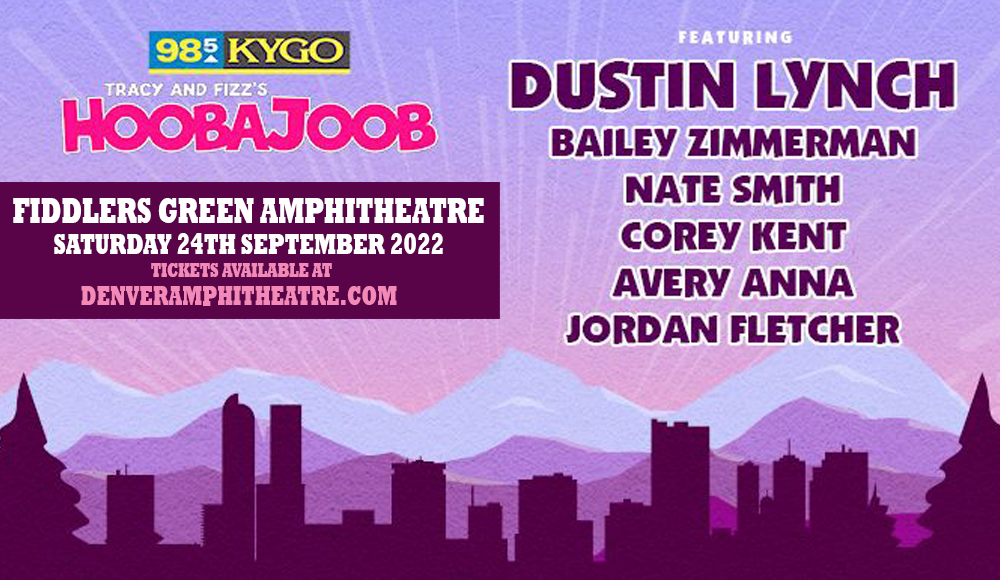 With 2022 marking the return of live concerts, Denver's #1 for New Country presents Tracy and Fizz's HOOBAJOOB where a star-studded lineup of artists are set to hit the stage and deliver a show to remember for all their fans. Off of the radio airwaves and onto the live stage, fans can witness top-notch performances from Dustin Lynch, Bailey Zimmerman, and Nate Smith at Fiddlers Green Amphitheatre this September 24th.

"Cowboys and Angels" singer Dustin Lynch has been making waves in the country music scene since his 2012 debut. The debut hit single hit #2 on Country charts and bagged itself a Platinum certification from the RIAA. Since then, Lynch found a special place in country listeners' hearts, becoming a favorite artist in the scene over the last decade for his alluring hits "Where It's At", "Small Town Boy", "Ridin' Roads", and "Thinking 'Bout You".

Another star of the show is the new fast-rising country music artist Bailey Zimmerman. He started posting original music on TikTok in December of 2020, and released his debut single "Never Comin' Home" in January of 2021 which quickly made it to the top 20 of Spotify's Viral Chart. His 2022 offerings "Fall in Love" and "Rock and a Hard Place" became bigger hits, with the former hitting #37 on the Billboard Hot 100.

Don't miss out on this star-studded concert of the year at Fiddlers Green by booking your tickets now!