Stop what you're doing and get ready to be a part of punk rock history! On Saturday 7th September 2019, The Original Misfits are coming to Fiddlers Green Amphitheatre, with their best-known line-up of Danzig, Only and Doyle, plus Dave Lombardo (Slayer) and Acey Slade (Joan Jett & the Blackhearts, Murderdolls)! The horror punk trailblazers will be tearing up the stage, performing all their classic hits and more at this rare and unmissable show! 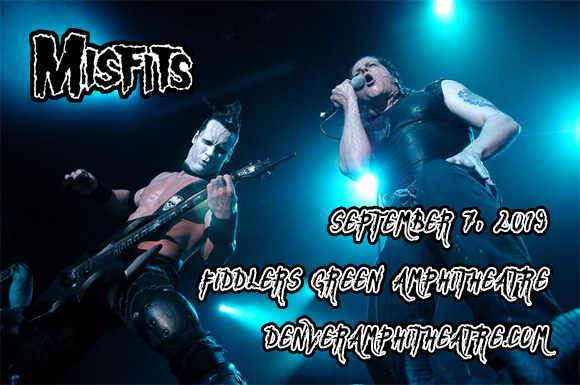 American horror punk pioneers Misfits formed in 1977 in Lodi, New Jersey. Forerunners of the early-1980s hardcore punk movement, the band influenced numerous subsequent artists with their albums Walk Among Us (1982) and Earth A.D./Wolfs Blood (1983). The group experienced a variety of line-up changes over the years and at times members and ex-members' relationships became acrimonious, but in 2016, the band's most notable line-up of vocalist and keyboardist Glenn Danzig, bassist Jerry Only and guitarist Doyle Wolfgang von Frankenstein reformed for the first time in 33 years under the name The Original Misfits, alongside Slayer drummer Dave Lombardo. The reunion was a resounding success and the band has regularly toured a select number of shows ever since.