Fans of fantastic comedy, look no further. Award-winning comedians Jeff Foxworthy & Larry the Cable Guy are teaming up for a fantastic performance at the Fiddlers Green Amphitheatre on Saturday 19th August 2017!! Don’t miss out – get your tickets to see the superstars live TODAY!! 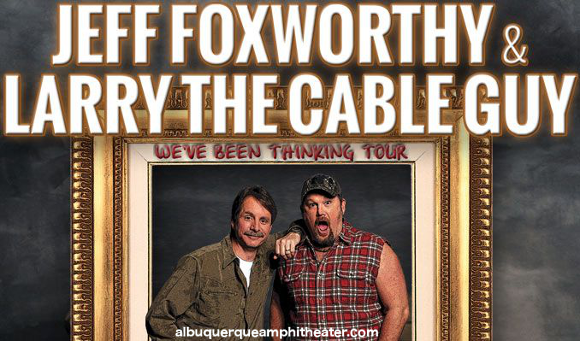 Known for his “You Might Be A Redneck” one-liners, Jeff Foxworthy is a television personality, stand-up comedian, actor, radio personality and author of several bestselling books based around his redneck jokes, as well as the autobiography “No Shirt, No Shoes… No Problem!” He is a member of the Blue Collar Comedy Tour, a collaborative with also Larry the Cable Guy, Bill Engvall, and Ron White. He has also branched out into TV, beginning with his own hilarious sitcom; “The Jeff Foxworthy Show.” Since 2007, he has also hosted the “Are You Smarter Than a 5th Grader?” quiz show on Fox.

A stand-up comedian, actor, country music artist and former radio personality, “Larry The Cable Guy,” is the alter ego of Daniel Lawrence Whitney, a specialist in character comedy, black comedy, and satire. Of his seven musical comedy albums, 3 have achieved shipments of an incredible 500,000 copies, and have been certified Gold by the RIAA. As well as providing the voice of Mater in the well-loved “Cars,” franchise, he starred in his own series, “In America With Larry The Cable Guy,” in which he traversed the country, in character amongst members of the general public, ensuing much hilarity.

Tickets to see the top comedians in the country won’t last long – what are you waiting for?? Get yours NOW!!