Country lovers, get ready for the biggest event of the year!! It’s Dierks Bentley, on tour with his new album, “Black,” with special guests Cole Swindell and Jon Pardi!! It’s all happening on Saturday 2nd September 2017 at Fiddlers Green Amphitheatre! Tickets for this event will sell out FAST so don’t delay in getting yours – hit the “Buy Tickets,” button NOW to be sure of your place!! 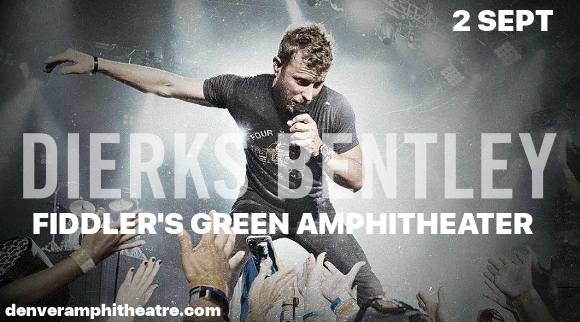 Dierks Bentley, the Grammmy-award winning, platinum-certified artist, did not achieve a career of 40 years by playing the same tune twice. He’s always taken surprising turns, keeping his audience on their toes, and none more so than now, and the release of his 8th studio album, “Black,” the title a deliberately provocative reference to the maiden name of his wife, Cassidy, with whom he has been with for 10 years. Bentley’s inspiration for the album Showtime series The Affair, about the fallout from an extramarital dalliance. Black, however, takes the concept and flips it on its head, in a storytelling album that looks at the serious ins and outs and nitty-gritty of a long term relationship – and all those involved and affected. Dierks described the album as; “the other side of the story, the things we don't talk about as much, like the two people who got ditched so two people could live happily ever after."

His new album may be uncomfortable listening for some, who aren’t as used to him exploring characters outwith himself, but there can be no doubt that “Black”, edgy, innovative, and truly pushing the boundaries, is his very best work yet.

Don’t miss out on your chance to catch the phenomenon live – get your tickets to see Dierks Bentley TODAY!!!